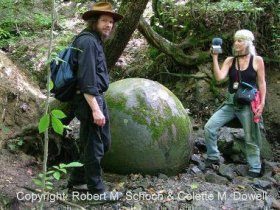 Translations of this article:

If you follow the Bosnian "pyramids" affair, you probably heard of the visit made by Robert Schoch (en) in Visoko. This geologist became quite famous with the controversy (en) that arised from his dating of the Sphinx of Giza (en). Robert Schoch holds, on the basis - to make it short - of certain types of erosion on its surface, to a much older date than the one usually accepted for the building of the Sphinx; he then published a series of books - much criticised by archaeologists and egyptologists - about the "real origins" of the ancient Egyptian and South-American pyramids. Despite this New Age "drift", as some would call it, Robert Schoch’s competences as geologist have never been questioned, nor his scientific integrity, as shown by the study he made of one of the most famous "pseudo-archaeological" sites, the one of Yonaguni (en), of which he showed that it is actually a natural formation, even if he doesn’t exclude a possible partial modification by man.

Robert Schoch was thus the "ideal man" for the study of Visocica: sufficiently scientist that one could hope for a real argumented report; and sufficiently "open" to what could be called "mysterious archaeology" that the pyramid supporters could trust his appraisement. His visit (at the call of the Foundation) was expected and thoroughly announced in the local media and on the Foundation website, and everyone seemed sure that he would confirm the "pyramid" hypothesis, the more so as his posts (en) or his companion and assistent Colette Dowell’s posts (en) on Ms. Dowell’s blog seemed to show, despite the usual prudence, a clear hope that the "pyramids" were at least partially artificial.

At the time when I write this (7th of August), Robert Schoch is still in Bosnia with Colette Dowell (tens of pictures of them are by the way published every day on the Foundation website), and there is still no official report on this visit. However, Colette Dowell has posted twice on her blog from Visoko, and these posts seem to show a clear change in their feelings.

The first post, dated 1st of August 2006 (en), is still quite optimistic. Colette Dowell reports their visit on the "pyramid", in the tunnel, mentions some findings that are nowhere to be found on the Foundation website (a fire pit, ceramics and various "weird" things). Ms. Dowell seems to appreciate her stay, and is only worried about the exactitude of the translation of their words on the Bosnian site.

The tone of the second post, dated 5th of August 2006 (en), and called "’Bosnian Pyramid’ Doubts" is very different. It begins with a photograph taken by Robert Schoch, showing the edge of one of the "pavements", said by the Foundation to be artificial, on Pljesevica, and confirming that "the layers they are calling pavement are of natural stone and not man made block". Ms. Dowell thus breaks the bad news: she and Robert Schoch have found no evidence of man made or another involvement of ancient origin aiming to create a pyramid.

The following of the post is still more troubling, as she clearly implies some manipulations or even frauds. To summarize the quite confused post written by a Colette Dowell evidently feeling very bad about the whole affair - and who can hardly wait to leave Bosnia:
– Beside many people who actually believe in the existence of the pyramids, Ms. Dowell mentions people "who know what is going on, but go along with it as it helps the economy".
– The report received by Ms. Dowell before she left for Bosnia on the tunnels (a report she mentions in a previous post), is according to her false and "does not match up to what the tunnels really are"; when she mentions this problem to Mr. Osmanagic, he says he has never received this report.
– The scripts found on a "megalith" in the tunnel were not there in the beginning, according to the geologist who went first inside the tunnel; "they just showed up" one morning and then there were more. And Ms. Dowell adds that she has become aware of "many deceptive happenings".
– Ms. Dowell also feels that politics and "people in powerful places" have something to do with the affair, particularly the oncoming elections (planned in September).
– About the "pavements" again, she stresses that some sections "are cut out of the side of the mountain and they are cleaned up to look like they are part of a complex", and even adds that it is "as if the so-called pyramid is being manufactured when they find something they can “add on” to create it", and that other parts, geologically important but that "presented evidence that was not in favor of a real pyramid", were "recovered".

Clearly this post gives a very bad impression of the whole affair. However, this is still not the scientific report from Robert Schoch, and one has to wait for this one to learn more of the real geology of the "pyramids".

Update : the complete report by Robert Schoch is now published on his website (en), and totally confirms these first impressions...

My book (in French) about the Bosnian ’pyramids’

Available as a book and as an e-book.

You can order it at the publisher Book-e-book !

Also in this section

His Royal Highness Prince Mensur or: the pyramids, the comet and the Queen of England
Russian nesting academies
The Dentist, the Architect, their Foreman and the Customer Service Manager
An outstanding team of experts
The Egyptians and Semir Osmanagic’s Theatre of the Absurd
One more, one less...
"What happened to the objective and unbiased journalism?"
A correspondence with Dr. Barakat
The Academician, the pyramids and the Moon
Egyptian news
For lack of any scientific arguments, the Osmanagic team uses threats...
Christian Schwarz-Schilling, Mr. Osmanagic’s High Representative?
Pseudo-scientific validation
The book "The Bosnian pyramid of the Sun"
Some news from the foreign scientists
Frictions inside the Foundation ?
The "family circle"
Using the appeal to authority
Google doesn’t like Bosnian scientists
Ghost scientists
Semir Osmanagic
Foreword